Lock and reload with this week’s update to Season Two of Warzone™ and Vanguard. Scout and conquer Rebirth Island Reinforced, prepare for a new mission across the Alps, and look for a new weapon and additional Bundles in the Store.

We’d like to thank you for your patience while we investigated the issue related to Battle Pass XP gains. We’re happy to say that this issue has been resolved. In light of this fix and to compensate players for the prior disruption, we’ve decided to do the following:

We hope you round off this Season on a fun note (maybe even a W) and look forward to seeing you in Season Three!

At the start of Season Two Reloaded, we talked about our intent to merge the core and Vanguard Royale experiences into a single, coherent Mode. We’ve now arrived at the final step of the merger, with Vanguard Royale Public Events joining the core BR event pool.

As a reminder, here are some of the other changes that were implemented to core BR over the previous weeks:

We’re excited to see this initiative come to fruition and look forward to monitoring your continued feedback. Time to drop in!

Loadout Weapons were clearly overpowered due to Players equpping effective combinations of Attachments on them. In order to level the playing field for everyone, we have removed Loadouts from the game. May RNG be on your side!

Data indicates that a considerable number of Players die upon Infil. Given the ongoing struggle, we’ve removed this initial barrier of entry. We’d like to thank our creators for providing live demonstrations of this issue.

Upon analyzing our heat maps, we’ve determined that Players need better tools to engage with one another in low density areas. We fully expect portable fortresses to help improve survivability and leave a mark on enemy morale.

We see this chapter of Warzone as an ever-evolving and layered gameplay space where we want both counterplay and interplay between systems to be viable. We want to provide Players with a variety of tools to create even more interesting stories or “big-brain” plays that take advantage of systems in ways that we as developers never thought possible.

Perks are going to make for a significant part of the push towards this objective. The changes observed today represent a glimpse of what is to come in Season Three.

Below are the outlined adjustments:

Scavenger was originally built for a multiplayer encounter where your eliminations are typically easy to reach and foot traffic aligns with elimination zones. In a Battle Royale setting, Players have a lot more space to cover and a lot more time passes in between encounters. With this change we aim to assist in identifying where your spoils of war are located while also providing more time to acquire them. The update to the items may seem small but a more aggressive Player may see better results in staying stocked up on gear.

Restock saw an increase in time with the original launch of Battle Royale. As Warzone has evolved, it has become noticeable that its strength has diminished. We want there to be stronger choices in the Red category of Perks that heavily impact the playstyle around the respective Perk, and there is an opportunity with this revamp to create room for experimenting with various equipment that doesn't get as much love.

With the adjustment to lethals dealing more damage in Season 1, we wanted to align E.O.D. with those changes so there is a viable counter in the Perk meta.

Quick Fix was already a decent meta contender but similar to the other perks it was primarily built for Multiplayer. This change makes its effect more potent in a Battle Royale setting and we hope will lead to some really fascinating plays.

In a pre-Caldera world, Ghost has always been very beneficial. However, in Caldera it is obvious that it has become even stronger with the ability to seek visual cover in foliage across the map. With this change we aim to balance the Perk around being mobile or being stationary, to provide more counter play opportunities around the Ghost perk. We are thoroughly looking at the stealth and detection meta with the intent to create more value in the options available to acquire and combat it.

We would like to thank all of our Players in the community who have made suggestions and generated discussions around Perks in Warzone. Please continue to provide feedback as we move towards some of the best Seasons of Warzone yet! 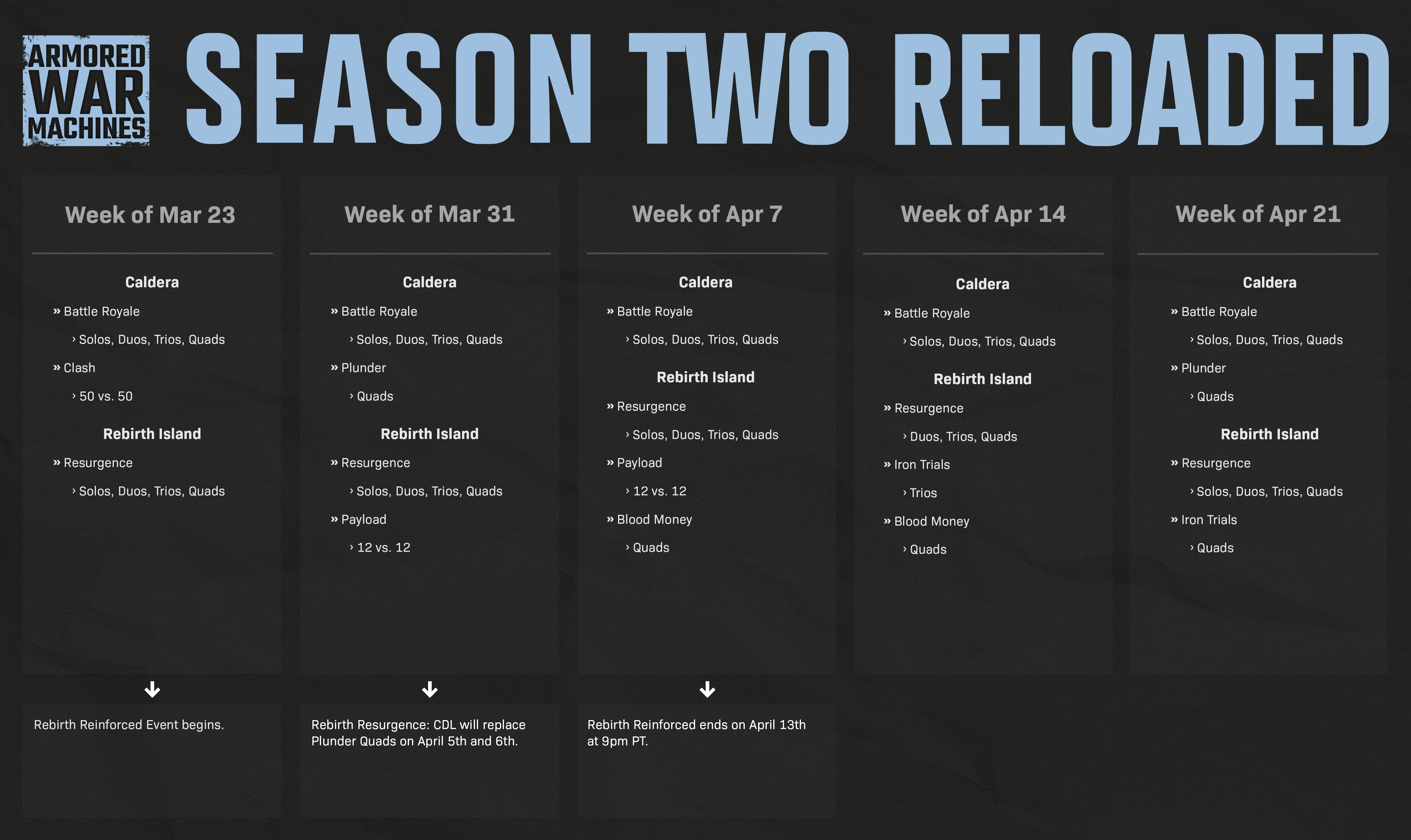 For regular updates about the Playlist and other Scheduled Events, check out the dedicated Warzone Trello Board.

Here's a complete list of Weapon Trade Station opportunities and their respective rewards:

As always we will continue to monitor and listen to feedback, as well as communicate any experiments that we plan to carry out during the in-season to further refine Battle Royale.

The previously empty Shore has now become Dock. With an anchored cargo ship now present, climb aboard via the extended concrete helipad and discover the loot inside.

The Prison Yard has been partially reinforced and the construction materials can be used as cover or as platforms for jumping onto the guard wall walkways. The repainted water tower with Persus’s flags looms in the distance.

A second cargo ship has arrived at the Nova 6 Factory. Explore the ship for items and Supply Boxes but avoid falling into the water - it could be dangerous!

For a list of known #Warzone issues, please check out our dedicated Trello Board.

The Vargo 52 (BOCW) is a powerful new addition to the AR category and was outperforming where we wanted it to be. We expect that the weapon will still excel within its damage range and will be keeping a close eye on it for the future.

The Volkssturmgewehr (VG) tended to drift to the right while firing, which could distract or obstruct sight when it mattered most. This change mutes that Weapon movement considerably.

ADS Interrupt Time is the point in the Aim Down Sight animation where it can be interrupted by other actions. This change will make its Handling feel lighter and more responsive.

Vanguard Marksman Rifles were behind when looking at velocity. These adjustments are intended to make them far more reliable at their optimal ranges.

This change is significant as Melee Weapons deal 135 damage, which if left unchanged, would consistently require 3 hits to kill with the increase to base health.

On paper, the Sten (VG) has an incredibly compelling stat-line. In reality, it suffered far too much from its limited magazine capacities–which prevented it from piercing the upper echelon of Submachine Guns. A moderate mag size increase will make the Sten (VG) a more competitive option for those who prefer highly-mobile playstyles.

Hollow Point has been heavily leaned on by Submachine Guns and with good reason. Its previous damage range penalty would rarely affect the most common engagement distances. This adjustment to the ammunition results in a powerful tool, you'll just have to get a little closer.

Our ongoing goal with ammunition is to provide options and move away from a singular choice that's "good for any occasion".

The Gorenko 40 Round Mags was simply providing far too much value and was overdue for an adjustment. This still leaves the Welgun in a very strong position despite the change to this particular Magazine.

The .30 round mags incorrectly went live with both an increase in damage globally and a decrease in locational damage for the head, neck, and upper torso. Only the decrease is intentional and as such, this update removes the flat 10% damage increase provided by the mag.

The power of this attachment primarily comes from the increased fire rate it provides the already lightning-fast Armaguerra. We’ll be monitoring its performance along with all other smaller magazines due to the change to core health and will make further adjustments as necessary.

The Season Two update will have a download size of approximately 9.0 GB for those who own the free-to-play console version of Warzone and are currently on the latest updates.

Note: PC users will also need 17.4 GB of additional space on their hard drive for the patch copying process; this is only temporary space that is reclaimed upon completion of the patch installation and is not an additional download.

Remember, the Vanguard download is not necessary if you are only playing Warzone, and vice versa.

Furthermore, for a smaller overall file size, Players can choose to uninstall/remove other data packs if they are no longer needed.

For regular updates about Call of Duty®: Warzone™, follow @RavenSoftware.