So here it is… the final major update for this era of Call of Duty®: Warzone™! We wanted to take a moment to thank our Players for joining us on this journey. We have learned so much this year and have come such a long way together since we launched the Pacific chapter in December of last year.

We’ve seen a 1940’s war-torn Pacific island, a reimagined and reinforced version of Rebirth Island, two movie giants - Kong and Godzilla - descend upon Caldera, the arrival of Mercenaries and with them Fortune’s Keep - a new map experience, all before the Terminators took over leading into to the eruptions at Peak.

But perhaps where we’re left most proud is with our team's work that has gone into Quality of Life improvements and our focus on reducing points of friction in the core gameplay loop. That said, we aren’t finished quite yet, as we detail the final set of improvements further below. We hope this transparent push for changes big and small, has been well received and helped craft the game experience you want to play.

To conclude, we would also like to extend thanks to all our partners at High Moon Studios, Beenox, Toys for Bob, Sledgehammer Games, Treyarch, Infinity Ward, Demonware, Activision, and Team Ricochet. Without these teams, this year's wealth of content would not have been possible.

We hope you enjoy the Mid-Season update... And we’ll be seeing you all very soon in Call of Duty®: Modern Warfare II. 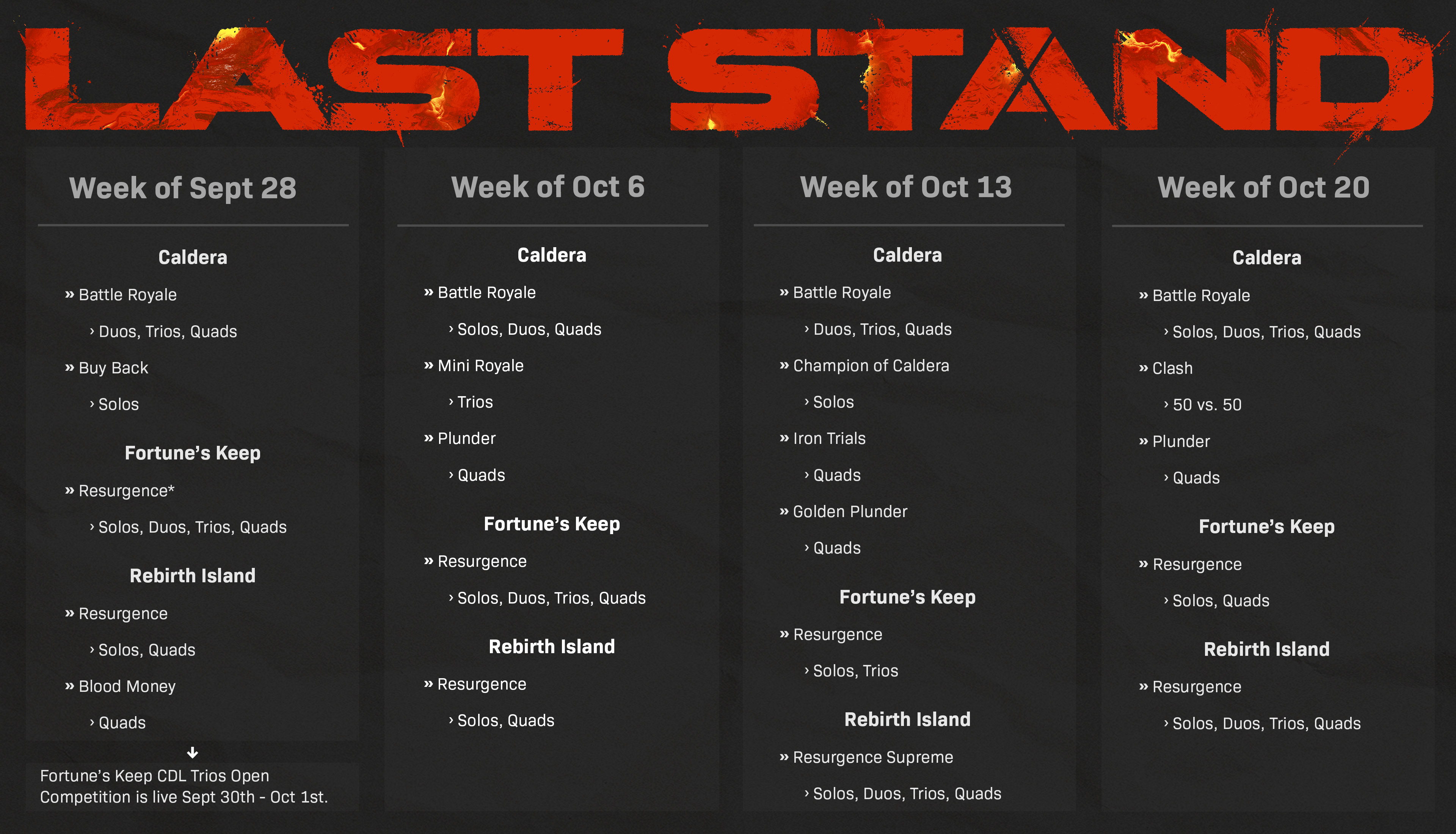 For regular updates about the Playlist and other Scheduled Events, check out the dedicated Trello Board.

Greatest Hits of the Year

To see out the Season, we’re excited to be bringing back a wealth of classics and fan-favorite game Modes. But first… some ground rules:

We will also be improving support for our “Solo” Players, with a wealth of variety to offer. We heard from our Solo community that they felt under-serviced in terms of solo game Modes so wanted to better expand the availability and choice of this squad size;

Regarding the “Greatest Hits” LTMs, Players can expect to enjoy the following appearing in rotation throughout the remainder of the season as we move away from daily rotations and back to weekly rotations:

Be sure to also keep an eye out for a surprise or two in the coming weeks as well!

We are excited to support the upcoming Fortune’s Keep Resurgence Trios CDL tournament. We will always have Fortune’s Keep Trios in the active Playlist to offer a place for Players to practice for the $100k tournament!

The only major change in this “CDL” variant is that the Mercenaries “Cash Extraction” Public Event has been disabled as we felt the Public Event didn't fit a competitive ruleset.

As part of our “Greatest Hits” outro, we are bringing “Mini-Royale” to Caldera for the first time. This high intensity, high time-to-action Mode will be a perfect note to end the season on.

Resurgence Supreme is what the team at Beenox consider the perfect version of the fan-favorite Rebirth Resurgence Mode with all new rules:

We hope this Mode will be a fun and challenging experience for everyone as having a Loadout isn’t as important as it normally is. May the best team win!

A Message from Butcher

With the final Season Five update comes a new cinematic outro from Butcher when you load into Warzone.

“Where has he been?”, you may ask. Well all we know is that he never left the island, but he has seen a LOT - and now it’s time to exfil as this journey isn’t finished yet…

As we conclude Season Five, we want to reflect on and immortalize a few fond stories that have had the community talking.

The following Calling cards are available to everyone for free from day one as a thank you to the community for sharing in these fun and memorable moments:

Thanks to a recent community poll where you voted overwhelmingly in favor of the Loadout Cost Reduction in Titanium Trials, we are happy to bring this change to Battle Royale to give better mid-to-late game regain opportunities. Be sure to grab your discounted Loadouts as the circle collapses, and as a reminder - don’t forget to look for the Loadout Drop icon on the squad widget that lets you know when you can afford a Loadout!

We love how ATMs have been used in Plunder and Golden Plunder. We are expanding their availability to Battle Royale as an additional choice for Players to make when regaining.

We feel that searching for a Legendary Supply Box should offer the best value proposition in the game - should you find one - with these beloved orange boxes being one of the most desirable aspects of finding a Golden Keycard.

We’d like to thank our entire community for every piece of constructive feedback and the positive engagement you have shown each season. Even at times where we turned left instead of right, we were never afraid to try new things to see how they landed… and correcting course where necessary based on your feedback.

Due to the positive sentiment of this feature that was originally rolled out to a smaller select audience, we are now happy to slowly roll this out to a bigger audience to better detail Weapons that are most meta relevant.

We liked the useful Player-leading that the Tac Map of Season Four had by circling the bunkers with Golden Keycard access points, so we have re-added these circles to the Tac Map for this final update.

We felt that the UX for the manual Gas Mask wasn’t as user-friendly as it could be, so we have made a few changes to better improve the experience for manual Players.

In the rush to pick up ground loot, it can often be difficult to know which Perk was just acquired. To help with this, Players will now see a short yellow text notification near their crosshair to inform them which Perk they just picked up. i.e. “Battle Hardened Perk Acquired”

This Perk is underutilized given its clear value for “Rusher” playstyles, so we have made a change such that the Scavenger pouch from an elimination will now contain a guaranteed $1,000. We expect this to be a real contender for being a default Perk in the slot, as well as strengthening its role as a Ground Loot Perk for any Players motivated by elimination chasing.

We want to position the Portable Decontamination Station as THE #1 gas play method, so we have significantly buffed its timer. This will clear a safe space in the gas to open up more interesting choices and opportunities.

As a celebration of the breadth of Weapons we have to offer, we’re taking the opportunity with Season Five Mid-Season update to really highlight all that’s been added these last few years. You’ll find a whole new Ground Loot and Gulag loadout experience along with some targeted hits to the most performant builds in the game, along with one last round of adjustments for the most underused Weapons.

For a list of other known #Warzone issues, please check out our dedicated Trello Board.

The Season Five Mid-Season update will have a download size of approximately 6 GB for those who own the free-to-play console version of Call of Duty®: Warzone™ and are currently on the latest updates.

Note: PC users will also need 19.1 GB of additional space on their hard drive for the patch copying process; this is only temporary space that is reclaimed upon completion of the patch installation and is not an additional download.

Remember, the Vanguard download is not necessary if you are only playing Warzone, and vice versa.

Furthermore, for a smaller overall file size, Players can choose to uninstall/remove other data packs if they are no longer needed.

For regular updates about Call of Duty®: Warzone™, follow @RavenSoftware.